For the last few weeks, I had been diligently looking on craigslist for an affordable camper for the upcoming fishing season—–tired of man handling the air mattress around each night in the tent to blow it up, just to wake up half way through the night cold and on the hard ground…and for those of you not here in Idaho…the ground is hard…..rock, hard.  I located an older one that was in Kennewick Washington, a mere 2.5 hours away.  Since Brian was working swing shift, I opted to make the drive by myself to scope things out…no one seemed to like the idea of me looking at it solo…which I do appreciate 🙂  Dale was nice to have one of his friends that lives in the Tri-Cities meet me there to look at the camper.

I ended up following the traveling MRI machine the whole way —at first I thought, oh great…this is going to take forever if I am stuck behind it —-but damn did it Haul!  I figured I could draft it and save some gas money—and it could take out any critters that wandered out into the road for me 🙂

I finally made it to Kennewick and was thrilled to find out that I didn’t have to really drive in the “big” part of town—-whew….all that stressing for nothing.  Dale’s friend was already there when I pulled in and had scoped the camper out…he gave me his blessing on it, and I started to check it out for myself.  It was pretty much just as the pics showed and I decided we’d go for it—sure as hell beats our tent!    This was Tuesday…and we wouldn’t be able to pick it up until Saturday when we had the day off….the week went by so slooooow…..but Saturday finally arrived.

On my way home—I was flying pretty high (not THAT kind of high–mind you I was in Washington, LMAO!)—-as I rounded a corner out in the middle of nowhere there was a pack of about 12 rabid Great Pyrenees dogs in the road.  As they bit at my bumper, I had no way to get away from them—short of running them over—-now that thought crossed my mind—as a dog lover, I just didn’t have it in me…and I was also in fear for my vehicle–Pyrenees are damn big dogs and I am pretty sure it would have done a number on the Sportage… FINALLY, about a mile later….the two lead dogs backed off just enough for me to floor it!  GONE! At least when I’m in Idaho, its usually cows, horses or a stray peacock in the road..not big, mean, rabid dogs!

We left a dreary, raining Valley with hopes that the weather might improve as we headed further west.  Even with the dreary weather, I was still able to snap a neat reflection picture of the Snake River as we left Clarkston.

Not long after that, we topped out on Alpowa, and the weather improved….it was beautiful up there! 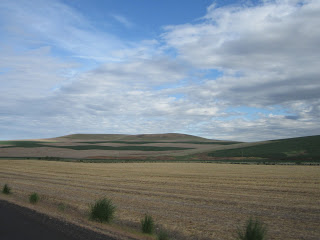 Had to stop for a coffee and P break….and I happened to notice that they had **check this** TWO, only TWO maple bars left!  Now I had it in my mind for some reason that I did not like maple bars…I don’t know why, because I can’t think of a time that I had ever tried one.  Since moving to Idaho, I have learned one thing…don’t get between these folks and their maple bars!  I took it as a sign, and we tossed them in with the coffee order… to my delight…they were absolutely finger lickin delicious!!

We finally made it to Kennewick and the Columbia River….
….as we were crossing the bridge, we saw a couple of cars flashing Gang sign to each other….  well that just made me feel warm and fuzzy inside…

Luckily they must have been homies “waving” to each other in their gang-speak….since we didn’t get shot up in the process….yes…loving the Tri-Cities so far…staring to understand why everyone was a tad bit concerned about me going over there alone!

On an up note, I finally got to see the Columbia River—it is HUGE 🙂  Not exceptionally pretty at this point, but it was still neat to see a new river!  I also saw a few smaller ones on the way over (namely, the Touchet and the Tucannon) that looked like they might warrant some research on the fishing opportunities available…

Since it was time for a P break again, I took Brian to a nice truck stop that was close to where the camper was located.  I had stopped there Tuesday when I made my solo trip.  We use the facilities and as we are checking out…..we notice they have a rather large selection of bongs and pot pipes…It is simply amazing the cultural experience that you can get in just one day and a 2.5 hour drive!  Holy crap batman! 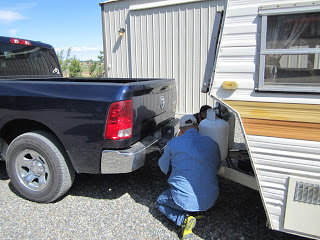 We finally  get to Kirk & Naomi’s place and get hooked onto the trailer…  Kirk shows Brian the ins-and-outs of the trailer while us women do the paperwork.  Within a 1/2 hour we are back on our way out of Kennewick. 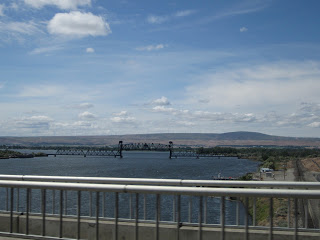 On the way out of town I was able to snap a quick pic of where the Snake River empties into the Columbia—kind of neat seeing where the river through town ends up!

Oh—and check this out—its almost flat-ish over that direction! 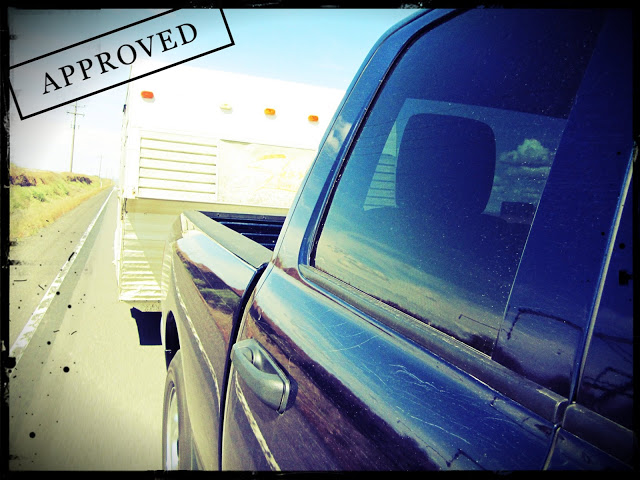 Great news is…the truck towed the camper!  I was a little concerned since we didn’t really know the weight of the camper!  She pulled it like a champ up and down Alpowa…and even with the wind, it wasn’t bad at all!

Made it home safe, and it seems as though the “other” family members will be just fine with the idea of a camper!
(it was so worth the trips—even taking into consideration the rabid dogs, gang members, bongs and windy ass weather!!–can’t wait for our first trip out in it!)

One thought on “Rabid dogs, Bongs and Gang signs…oh and a camper!”