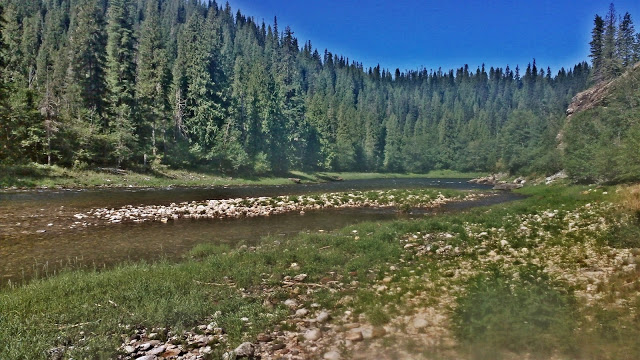 We decided to drive out to the North Fork of the Clearwater for a day trip.  On the way out of town, we ran over to Chris’ house to pick up some flies he offered to let us have, since we hadn’t fished it before, and it is his all time favorite place to go.  It seemed like it took us FOREVER to get there!  Eventually the river came into view and we found a likely looking spot not too far up.

This was my 2nd time out, only a week or so after we hit the Lochsa with KCF.  With this in mind, I kept close to Brian so he could help if I needed it.  After a little while, I had a strike!   I was able to play the fish successfully and brought it to net.  This was the first fish of any real size I had hooked into.  It wasn’t huge, but man did it fight!  The only thing I could relate it to at the time, and even still, as far as how it felt, was when I arrowed my first deer.  The adrenalin rush was amazing! and addicting!  The big difference though, is I have one deer tag….I can catch a zillion fish day in and day out…and get that feeling!  I do believe it was this point, that bowhunting took a back seat in my life and fly fishing took over.   Don’t get me wrong, I still love bowhunting, and hunting in general, I love meat in the freezer and it still gives me a chance to be in the wild…but it just isn’t the same!  When I fish, there is no pressure to “fill the freezer” or make good on a tag and avoid the dreaded “tag soup” at the end of the year.  If I net it, great! If I don’t, then it was still a blast and I can cast again!